, /PRNewswire/ --  (NYSE American: MNI) today announced 12 President's Awards for journalists who held officials accountable, forced transparency into dark corners of government and told stories that connected with millions of readers around the U.S. in original, compelling and essential ways. 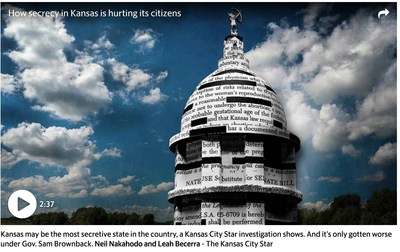 won a President's Award for "Why So Secret, ?" a series of stories that laid bare the state's penchant for secrecy in everything from legislative affairs to the workings of its child welfare agency. The Star's work has prompted state legislators to introduce dozens of new transparency measures -- and to promise an end to the practice of allowing lawmakers to introduce bills anonymously.

and won for the third consecutive year, this time with "Sometime in the Night," a complex piece of journalism built around a tragic accident that took the life of an infant and changed the life of a troubled family.

Four different newsrooms were honored for work that exposed wrongdoing in America's prisons and jails -- , , and The Tribune in

And in , together with video team, was honored for "Out Here in America," a podcast and live event focused on LGBTQ issues.

The President's Awards, now in their 18th year, recognize the best work of 2017 by the company's 30 newsrooms.

"We are very proud of the extraordinary diligence, passion and commitment of our winning journalists who have excelled this year in continuing the strong tradition of watchdog reporting at ," said , president and CEO. "Our annual awards illuminate the importance of local news and the essential role it plays in our communities, for our society and in strengthening our democracy."

Here is a complete list of this year's President's Award winners, together with comments from the judges:

The Kansas City Star
Why so Secret, ?

A series of stories exposing a penchant for secrecy that permeates virtually every part of state government in , from the workings of the legislature to the actions of police. The judges said they were "struck by the way The Star's investigation took aim at something that has big implications for all sorts of stories and for everyone in ."

An investigation into abuses inside juvenile justice system.  The reporters found a system beset by illegal restraints, medical neglect, slipshod hiring, sexual abuse and youth-on-youth beatings orchestrated by guards and rewarded with treats -- a practice known as "honey-bunning." The judges praised The Herald's "visually dynamic" report as "a reminder of what meaningful journalism can be."

An in-depth investigation by a team of Observer reporters found a hidden world of drugs, sex and violence thriving inside N.C.'s prisons – and in some cases, the state's officers were fueling the corruption. The judges called the project "really impressive accountability reporting" and noted that it "clearly took a massive amount of sourcing and interviewing to piece together."

Slaves of the Sex Trade
, reporter

Reporter exposed human trafficking activities that run deeper and broader than most readers would have imagined. Police in say that virtually every 16-year-old girl in the community has probably been approached by a recruiter at one time or another -- and neither the girls nor their parents would have known it. The judges credited Appleton's "intimate interviews" with victims for driving home the fact that human trafficking could be happening "in your backyard,"  and "your younger sister or cousin could be messaging with someone and be sucked into this terrible world."

The Fresno Bee
Too Young?
, reporter

Reporter endured sustained attacks from a local politician as she examined the causes of high teen birth rates in .  In addition to other cultural causes, she determined -- through the use of "listening posts" where teenagers could share their views -- that young people weren't getting the sex education they wanted and needed. The judges praised Mays's "innovative" reporting efforts, adding: "She could have just done profiles of teen moms (and she does that very well), but she went above and beyond."

A dispute between two young men playing "Call of Duty" led one of them to make a "swatting" call -- telling dispatchers, falsely, that a deadly hostage situation was unfolding inside a home.  Police responded and took positions. When one of the residents of the house opened the door, unaware of what was happening, a police officer shot and killed him.The judges credited The Eagle for moving quickly from breaking news coverage to accountability coverage -- and for leading the way on what would soon become a national story.

When died in the last year, the coroner declared the cause of death to be "natural."  In fact, as reported, Holland died after spending nearly 48 hours strapped, immobile and naked, in a jail "restraint chair." Fountain ultimately obtained and published surveillance video from inside the jail -- video that cast serious doubts on other claims made by local officials. The judges called Fountain's work "accountability journalism that is forcing real change in the way jailers treat mentally ill inmates."

Sometime in the Night
and , reporters

When an infant died in a tragic accident, police investigating the case found a family of eight sharing a single mattress in living conditions they described as the worst they'd ever seen. How could this happen? Could it have been prevented? and explored these questions in a complex and unsettling piece of long-form journalism. The judges credited Hundsdorfer and Pawlaczyk for "producing journalism that grappled with incredibly difficult questions while eschewing easy answers."

The first podcast ever to win a President's Award, "Out Here in America" focuses on LBGTQ people who live in the South and in smaller communities across the country. It has attracted tens of thousands of listeners, and a live event in drew hundreds of people to watch the podcast being produced. The judges hailed the "innovative project" and called it "especially impressive work" coming from a smaller newsroom.

McClatchy Video Lab
Hope and a Back Handspring
and

An inspiring short documentary tells the tale of a cheerleader who refuses to let Down Syndrome define her. As a native video on , it has been viewed more than 4 million times. The judges praised the inspiring video for "telling a big story while telling a small one."

In a deeply reported piece of revelatory journalism, explores the world of hardcore competitive youth baseball -- a game so intense that coaches recruit nine- and ten-year-old boys from around the country to play on their teams. One of the judges said of Caplan's work: "It's the kind of story I would say to a friend, 'You should really read this, it's amazing.'"

The () News & Observer
Jailed to Death
and

Journalists at The News and Observer meticulously tracked deaths from every jail in -- and discovered that one in every three of them involved a lack of adequate supervision of inmates.  The judges admired the "tenacity" of the journalists on the project, noting that no one even tracked jail deaths in until the News & Observer's team did so.

About McClatchy
operates 30 media companies in 14 states, providing each of its communities with high-quality news and advertising services in a wide array of digital and print formats. is a publisher of iconic brands such as the , , , , , and the () . is headquartered in , and listed on the New York Stock Exchange American under the symbol MNI. #readlocal