, Oct. 11, 2018 /PRNewswire/ --  and McClatchy Studios announced today the launch of "Carruth," a serialized podcast about the former star receiver who was implicated in the murder of his pregnant girlfriend, . Carruth, a former draft choice of the , has been serving a 19-year sentence for conspiracy to commit murder. He will be released from prison . 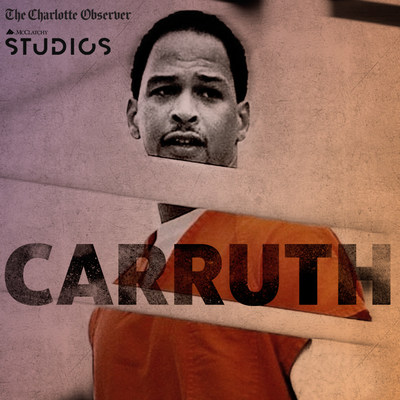 The series is based on the reporting of sports writer , who also serves as the host of the podcast and breaks new ground in the case.

"Scott is among the leading authorities on this case," said , executive editor of . "He has covered this story from the day Carruth joined the , to the day of the shooting, through the three-month-long trial, and to this day."

The "Carruth" podcast is part of a seven-part multimedia package produced by and McClatchy Studios comprising the audio, videos and news stories for each chapter of the saga. All of the bingeable chapters will publish . That day, the full package can be found at charlotteobserver.com/carruth. The podcast will also available on at charlotteobserver.com/carruthpodcast, and on Apple Podcasts.

"I have been fascinated by this story for the better part of two decades," Fowler said. "It not only produced our city's trial of the century, but its larger themes strike chords that go far beyond football: murder, betrayal, seduction, love, resilience and courage. For me it is the story of a lifetime, and one I don't think has ever been fully told until now.

"This rich and engrossing story lent itself perfectly to the audio format. We had so many elements, from haunting 911 call to a lengthy interview I recorded with her killer to the compelling storytelling of Cherica's mom, ."

While doctors could not save , her son was delivered by emergency C-section 10 weeks premature. Chancellor is now 18 years old and calls her grandson the "miracle boy."

The podcast is supported by leading nonprofit domestic violence and children's advocacy organizations: The National Coalition Against Domestic Violence, NO MORE, and the .

"We're grateful for the support of our partners," said , senior podcast producer. "This October, during Domestic Violence Awareness Month, we're proud that the powerful story of and her grandson, Chancellor Lee, will help expand the conversations about domestic abuse and children's welfare in , and far beyond."

The podcast episodes are each roughly 35 minutes in length:

, a former model and dancer from , meets player at a summer pool party. Carruth, a native, has looks and a magnetic charm. Soon Cherica is pregnant—but the harrowing trail of women in Carruth's past suggest the first-round draft pick is struggling with adult responsibility in the face of the fame and fortune lavished upon a young professional athlete.

A murder plot unfolds. From deep inside a maximum-security prison, hitman offers us a meticulous and unflinching account of the deal he struck with to murder and their unborn son. Coupled with explosive confession tapes and a gripping 911 call, a portrait of Carruth as a master manipulator emerges. To this day, however, some still vehemently dispute Carruth's involvement.

Emergency crews race to the hospital, and her son, Chancellor Lee, is born via emergency C-section, 10 weeks premature and weighing less than 4 pounds. Police investigators describe to us piecing together the events of that night, as Cherica's handwritten notes from her hospital bed point the way toward . But as she and her son both fight for life in , only one will survive.

As funeral arrangements are made in , flees the state in the trunk of a friend's car. Soon, he's the target of an FBI manhunt led by agent , who recreates for us the trail that led him to a parking lot in rural , where he found Carruth stuffed in the back of a Toyota Camry. Carruth becomes the first active player to be charged with first-degree murder.

Chancellor Lee heads home from the hospital under the watchful eye of his maternal grandmother, . Before long, the most notorious trial in history gets under way, and quickly sees lawyers sparring with witnesses, and with each other. With facing the death penalty, his lead defense attorney tells in more detail than ever before how he attempts to make his case and save Carruth's life—but will the jury believe him?

Jury foreman takes us inside days of tense deliberations, before he delivers the verdict on charges against that pleases no one—yet survives every appeal. As Chancellor Lee grows, his doctors explain to us diagnosing him with Cerebral Palsy as a result of his traumatic birth. Chancellor Lee's speech is halting and his movement labored, yet thanks in part to physical gifts inherited from his father, Chancellor Lee surpasses doctors' expectations for his progress and development in physical therapy, at the nearby horse-riding stables, and at home.

As prison release date nears, , the mother of the pregnant woman Carruth conspired to murder, tells us how she's found a way to forgive the men who killed . Those closest to the case wonder what if any relationship Carruth should have with Chancellor Lee. honors her daughter's legacy through advocacy work on behalf of domestic violence survivors in and beyond.

About
Since 1886, has been dedicated to serving and its surrounding region with strong, independent journalism. The Observer is the largest circulating newspaper in and the most visited news and information website in the Carolinas. Its staff has won four Pulitzer Prizes, including two Gold Medals for Public Service. #Readlocal

About McClatchy Studios
McClatchy Studios is the documentary production arm of and is dedicated to revelatory nonfiction storytelling driven by local characters with national appeal. We tap into the rich, on-the-ground reporting by our team of multimedia journalists based in local communities across the US and package it in formats that engage audiences on a variety of platforms. We find compelling ways to embrace everything storytelling can be — inspiring, motivating and entertaining.

About
operates 30 media companies in 14 states, providing each of its communities with strong independent local journalism in the public interest and advertising services in a wide array of digital and print formats. publishes iconic local brands including the , , , , , and the () . is headquartered in , and listed on the New York Stock Exchange American under the symbol MNI. #ReadLocal